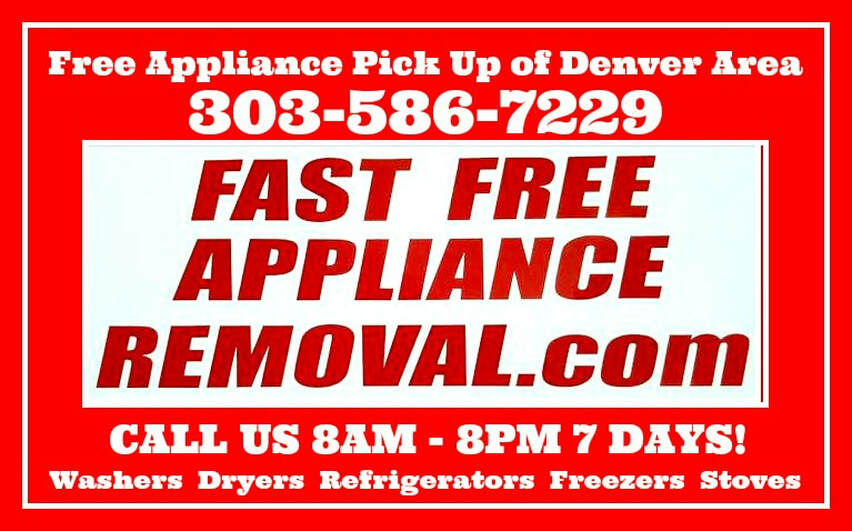 If we can rebuild them, we take away older and unwanted Washers, Dryers, Refrigerators, Stoves and Freezers.

With Denver, Colorado being the 19th largest city in the United States, quite a bit of e-waste is produce. With a population of over 700,000 and growing faster than 73% of similarly sized cities in the nation, waste management services are constantly expanding. With Fast Free Appliance Removal's independent contractors picking up thousands of discarded major appliance, they really relieve the burden on trash collection service by recycling these appliances.
Unlike  junk man and hauling companies in Denver that sell them for pennies a pound at the scrap metal yard, our goal is to refurbish them for resell, or donation to Denver's local charities and local food banks.
Because we do not rebuild them, we not pick up dishwashers, water heaters and microwaves free, UNLESS we are taking other appliances as well. We also have no interest in anything rusted out, really beat up, or has bugs in them.

We can pick up appliances we don't want for a fee and we are normally WAY CHEAPER than a junk hauling company. Call us at 303-586-7229 with any questions
When Waste Management, city garbage pick up and local junk companies in the Denver CO area pick up major household appliances, they take them to the scrap metal yard. Though that is better than going to a landfill, there is still a lot of harmful waste being put into our environment.

Refrigerators produce so much waste when being processed for their scrap metal. Insulation, plastic, computer boards and capacitors are crushed up to be buried in the landfill. Oil in the compressors drip into the ground and Freon / refrigerant gases are released into the air.

Our process saves and recycles all plastic parts to be sold online. Any working units are tested, cleaned and sold as used appliances, or donated to local to a charity. Though we sell most units to recover our costs, Fast Free Appliance Removal is dedicated to helping out with donations to reputable local charities in the Denver Colorado area.